Show.earth  Add a 'KC Monthly' CO2 widget to your site or blog 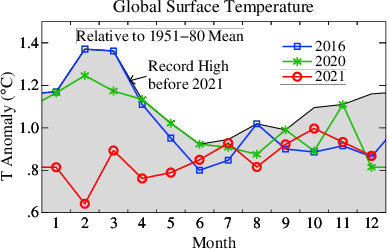 "Almost all ENSO (El Nino Southern Oscillation) models including NOAA’s NCEP model project minimum Nino3.4 temperature by December. Given the present extreme planetary energy imbalance – more solar energy absorbed than heat radiated to space – the 12-month running-mean global temperature is now at or near its minimum, which means that the annual 2021 temperature will be the sixth warmest year (the five warmest being 2020, 2016, 2019, 2017, 2015)."

"Abstratct: Record global temperature in 2020, despite a strong La Niña in recent months, reaffirms a global warming acceleration that is too large to be unforced noise – it implies an increased growth rate of the total global climate forcing and Earth’s energy imbalance. Growth of measured forcings (greenhouse gases plus solar irradiance) decreased during the period of increased warming, implying that atmospheric aerosols probably decreased in the past decade. There is a need for accurate aerosol measurements and improved monitoring of Earth’s energy imbalance.

November 2020 was the warmest November in the period of instrumental data, thus jumping 2020 ahead of 2016 in the 11-month averages.  December 2016 was relatively cool, so it is clear that 2020 will slightly edge 2016 for the warmest year, at least in the GISTEMP analysis. The rate of global warming accelerated in the past 6-7 years (Fig. 2). The deviation of the 5-year (60 month) running mean from the linear warming rate is large and persistent; it implies an increase in the net climate forcing and Earth’s energy imbalance, which drive global warming."

"The science is sobering—the global temperature in 2012 was among the hottest since records began in 1880. Make no mistake: without concerted action, the very future of our planet is in peril."

"Globally-averaged temperatures in 2015 shattered the previous mark set in 2014 by 0.23 degrees Fahrenheit (0.13 Celsius). Only once before, in 1998, has the new record been greater than the old record by this much."

Before the end of 2015, scientists projected that average global temperature increase for 2015 will exceed 1°C above pre-industrial levels.  The years 1850-1900 are used as the pre-industrial baseline by the MET Office and Climate Research Unit at the University of East Anglia in the UK.  The MET Office released this statement in November 2015:

"This year marks an important first but that doesn't necessarily mean every year from now on will be a degree or more above pre-industrial levels, as natural variability will still play a role in determining the temperature in any given year.  As the world continues to warm in the coming decades, however, we will see more and more years passing the 1 degree marker - eventually it will become the norm."