If we focus on climate change as the problem, the key driver is accumulating CO2 emissions that keep pushing atmospheric concentrations higher.

"Cumulative emissions of CO2 largely determine global mean surface warming by the late 21st century and beyond. Projections of greenhouse gas emissions vary over a wide range, depending on both socio-economic development and climate policy."

CO2.Earth brings focus to the critical problem of 'rising CO2.'  It also situates this problem among a broader array global environmental problems.  This broader context is provided by content related to the Annual Greenhouse Gas Index, "The Great Acceleration" (see "The GA" tab on this page) and Planetary Boundaries.  Each problem appears to identify a problem in the relationship between humankind and the earth system.  Learning about the problems may offer an opportunity to improve our collective relationship with the earth.

This "problem identification" sets out some of the dimensions of the climate and other global environmental problems. It offers a starting place to answer questions like these:

If we focus on climate change as the problem, the key driver is accumulating CO2 emissions that keep pushing atmospheric concentrations higher.

"Cumulative emissions of CO2 largely determine global mean surface warming by the late 21st century and beyond. Projections of greenhouse gas emissions vary over a wide range, depending on both socio-economic development and climate policy."

CO2.Earth brings focus to the critical problem of 'rising CO2.'  It also situates this problem among a broader array global environmental problems.  This broader context is provided by content related to the Annual Greenhouse Gas Index, "The Great Acceleration" (see "The GA" tab on this page) and Planetary Boundaries.  Each problem appears to identify a problem in the relationship between humankind and the earth system.  Learning about the problems may offer an opportunity to improve our collective relationship with the earth.

This "problem identification" sets out some of the dimensions of the climate and other global environmental problems. It offers a starting place to answer questions like these:

The Intergovernmental Panel on Climate Change (IPCC) has given government policy makers the most authoritative and objective scientific and technical assesments of changes to earth's climate system.  The reports it publishes are the product of work by thousands of experts and scientists around the world who represent a wide range of views and disciplines.

The following excerpt summarizes the 2014 Synthesis Report (SYR) in one paragraph.

The SYR confirms that human influence on the climate system is clear and growing, with impacts observed across all continents and oceans. Many of the observed changes since the 1950s are unprecedented over decades to millennia. The IPCC is now 95 percent certain that humans are the main cause of current global warming. In addition, the SYR finds that the more human activities disrupt the climate, the greater the risks of severe, pervasive and irreversible impacts for people and ecosystems, and long-lasting changes in all components of the climate system. The SYR highlights that we have the means to limit climate change and its risks, with many solutions that allow for continued economic and human development. However, stabilizing temperature increase to below 2°C relative to pre-industrial levels will require an urgent and fundamental departure from business as usual. Moreover, the longer we wait to take action, the more it will cost and the greater the technological, economic, social and institutional challenges we will face.

"The second half of the twentieth century is unique in the entire history of human existence on Earth. Many human activities reached take-off points sometime in the twentieth century and have accelerated sharply towards the end of the century. The last 50 years have without doubt seen the most rapid transformation of the human relationship with the natural world in the history of humankind."

Rising CO2 is a critical disturbance that humans are making in the biosphere.  But it's not the only one.

The start of the Industrial Revolution is often referenced as the point when our speicies begain to exert notable pressure on the functionning of the earth system.  A lot has changed since the late 1700s when James Watt brought steam engines into the world.

Early in the 21st Century, researchers at the International Geosphere-Biosphere Programme (IGBP) in Sweden set out to record a trajectory of the 'human enterprise' in recent centuries.   They chose 12 indicators that tracked changes in the human enterprise, and 12 that tracked changes in the function and structure of natural systems.  They wanted "to build a more systematic picture of the human-driven changes to the earth system" (Steffen et al., 2015, p. 2).  To their surprise, they found a "dramatic change in magnitude and rate of the human imprint from about 1950 onwards" (p. 2).

This was not news among historians, but not generally recognized among earth system scientsts.  Nonetheless, scientists consolidated and quantified the changes.  They aimed "to capture the holistic, comprehensive and interlinked nature of the post-1950 changes simultaneously sweeping across the socio-economic and biophysical spheres of the earth system, encompassing far more than climate change" (p. 2).

Below, you can see latest charts for indicators the IGBP posted in January 2015.

Will Steffen and his research team report that "The Great Acceleration" was first used in 2005 at a workshop in Berlin after the publication of the 24 planetary indicators. The quote below is taken from the workshop report.

"The “engine” of the Great Acceleration is an interlinked system consisting of population increase, rising consumption, abundant energy, and liberalizing political economies. Globalization, especially an exploding knowledge base and rapidly expanding connectivity and information flow, acts as a strong accelerator of the system. The environmental effects of the Great Acceleration are clearly visible at the global scale: changing atmospheric chemistry and climate, degradation of many ecosystem services (e.g., provision of freshwater, biological diversity), and homogenization of the biotic fabric of the planet. The Great Acceleration is arguably the most profound and rapid shift in the human–environment relationship that the Earth has experienced."

Critical Angle  Skuce (2015) The history of emissions and TGA

"Human influence has been detected in warming of the atmosphere and the ocean, in changes in the global water cycle, in reductions in snow and ice, and in global mean sea level rise; and it is extremely likely to have been the dominant cause of the observed warming since the mid-20th century. In recent decades, changes in climate have caused impacts on natural and human systems on all continents and across the oceans."

The earth system is large, complex and dynamic.  Detecting planetary changes and attributing causes requires collaboration among many skilled researchers who make many kinds of observations and use many kinds of instruments and plus computer models to expand knowosed about the earth sytem.

Individuals are learning within a cooperative context.   Consider Dave Keeling as an example of an individual scientist.  Keeling is well known for starting the longest-running instrument record for CO2 measurements at the Mauna Loa Observatory, 3400 metres above sea level.  The first monthly average he reported, 315.71 parts per million for March 1958, remains an important datapoint that is still incorporated into studies and models by scientists today.  Over time and around the world, this kind of earth monitoring work ultimately forms the basis for what scientists know about the earth system and how it behaves.

Forcings are factors outside the climate system that force or drive changes to the climate system.  This essentially means that a measurable external change is forcing a change in average temperatures, either warmer or cooler.

NOAA Paleoclimatology  What are climate forcings?

As certain human activities continue to drive multiple changes in the earth system, we may expect impacts that cascade and worsen the longer we continue the activities that warm, acidify and degrade the biosphere.  Because human institutions have not committed to a plan that will stabilize the concentraion of greenhouse gases in the atmosphere, we don't know the extent of future global changes.  This signficantly reduces certainty of a stabilized future.

To be blunt about the situation, the following perspective comes from Professor Kevin Anderson, Deputy Director of the Tyndall Centre for Climate Change Research.

"We are in ‘injury time’ for 2°C – and things are not looking good. However, time will continue regardless even if we blow the 2°C carbon budgets, we still need to drive even harder for deep and rapid mitigation alongside preparing for the regional impacts of a 4, 5 or even 6°C future. But we must note that adaptation to such a future scenario will never be sufficient for the many millions who will suffer and die as a consequence of the fossil fuelled hedonism enjoyed by relatively few of us – including me and very likely anyone reading this; we are the high emitters who have explicitly chosen not to care."

The IPCC made a statement that seems scientifically compatible, but the tone is less personalized.

"Without additional mitigation efforts beyond those in place today, and even with adaptation, warming by the end of the 21st century will lead to high to very high risk of severe, widespread and irreversible impacts globally."

Nature and Extent of Impacts

Accumulating evidence from a variety of past crises suggests that humanity may be moving increasingly toward a future marked by multiple global and interconnected risks.  When a risk to a financial, social or ecological system materializes as a crisis, the changes are sometimes non-linear, abrupt, surprising and even irreversible. Such crises are often triggered by a mix of interacting social, environmental and technological factors. [See Galaz et al. (2011)]

To see examples of social and economic impacts at CO2.Earth,  jump to the page about people and communities on the front lines of global climate change.

Below, a list of links has been started for scientific data, indexes and images that show the types of changes that are happening worldwide on land and in the oceans.  To begin, the following graphic is updated each day to show cumulative days of ice melt in Greenland. 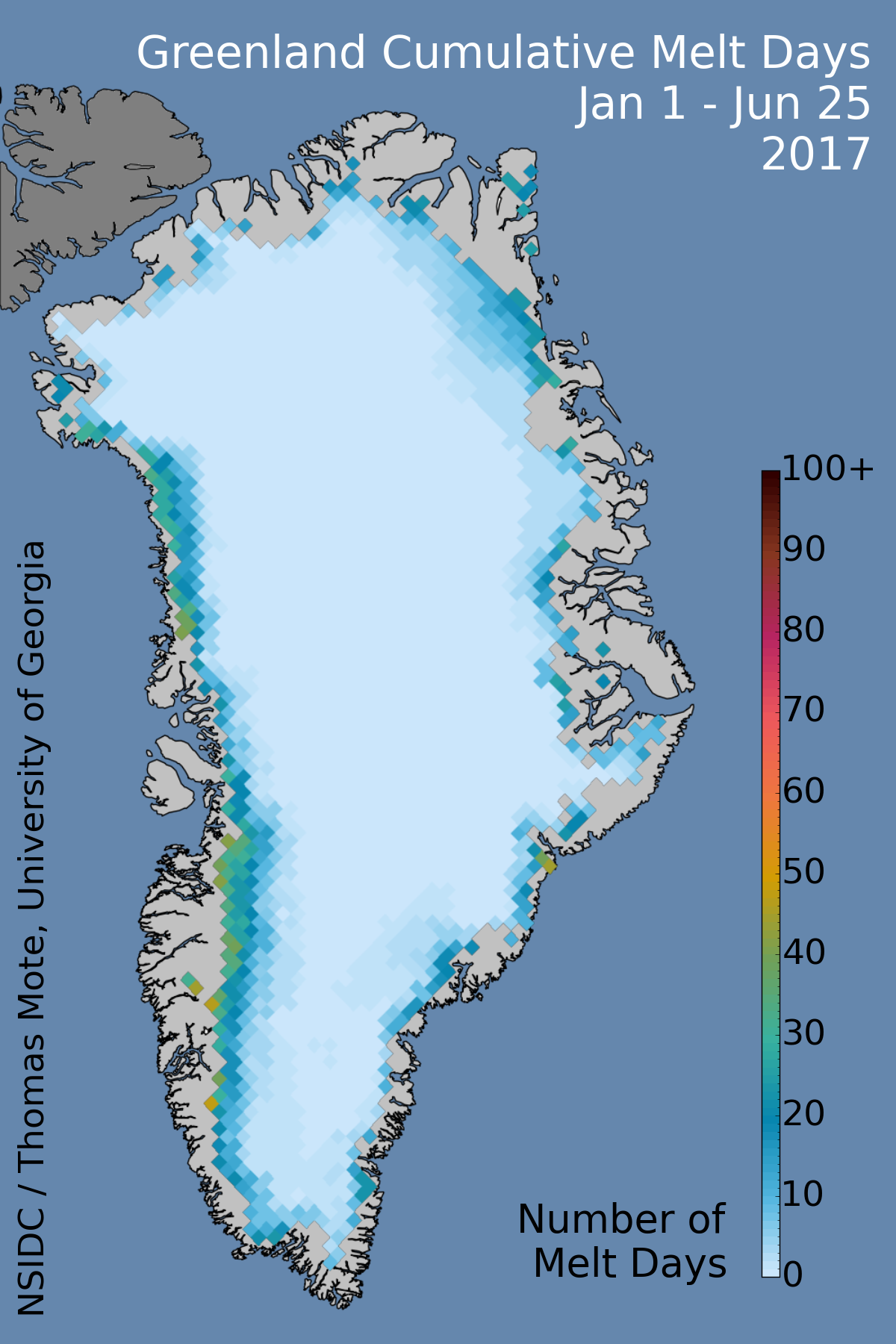 ELOKA  Exchane for local observations and knowledge of the arctic